ACCIONA | SAINZ XE Team is second at the Desert X Prix, its best result to date

ACCIONA | SAINZ XE Team finished the Desert X Prix in second place, clinching its best result to date and also confirming the fact that the Spanish team has taken a step forward in this second season of the Extreme E Championship.

Carlos Sainz masterfully led the first lap of the race and Laia Sanz kept the Spanish team in the lead up until the penultimate corner, when she was overtaken by the current champions Rosberg X Racing, who went on to win the event.

Even though the end of the race was not perfect, the effort that Carlos and Laia did in Neom proved that the team is progressing. Its target to fight for race wins and the title are strengthened after the season opener, not only because of the result but for the strength and pace shown across all sessions.

In the Final, Carlos Sainz did a perfect start from the inside line and made it to the first corner in front of the car of the X44 team, which had Sébastien Loeb at the wheel. The Spanish driver didn’t put a foot wrong and had a two-second advantage as he came to the end of the first lap.

Laia Sanz stepped in for the second lap, although the race was stopped briefly due to a red flag. She offered her best performance to date under pressure from rivals with more experience on four wheels than her. Only in the final meters, Rosberg X Racing was able to catch her.

When the drivers got to the Switch Zone at the end of the first lap there was a red flag to recover the car of the McLaren team, which had crashed after the start. The race was restarted respecting the gaps that there were prior to the stoppage.

The ASXE Team qualified for the Final when it finished second in the Semi-Final 2. Laia Sanz did a great start and offered a superb display of defensive driving against Andretti United. Carlos Sainz defended second place and brought the car to the finish line to make it to the final round.

This result gives 18 points to the ACCIONA | SAINZ XE Team, who is now second in the standings of the Extreme E Championship. The next round in the calendar is the Island X Prix, which is set to take place in Sardinia on the 7th and the 8th of May.

“We are really happy with this second place. Since last year we have improved a lot for a number of races, but for whatever reason, we had never managed to put it all together in the final result. Today we did precisely that. Laia did a fantastic job and her evolution since last year has been simply phenomenal. We are closer to the top step of the podium. Congratulations to all the ACCIONA | SAINZ XE Team and I want to say thank you also to all our sponsors for their support. We will continue working hard to earn that first place”.

“Carlos did a mega job in the Final. I was under quite a lot of pressure because I had many beasts behind, but we still did a good job. Sadly, Kristoffersson passed us in the end, but what we have done this weekend gives us a lot of motivation for this season. We know we can fight for victories. I am still improving and I hope to progress much more and that in the future we get better results than the one we got today in Neom”.

“We are really happy with what we saw in the Desert X Prix, not only because of the podium we got with this second place but because after this first weekend we are absolutely convinced that we will be fighting for wins in each and every race. We have the team and we have the drivers, and we are in a position to lead and win. This podium is the first step and the next one has to be the victory”. 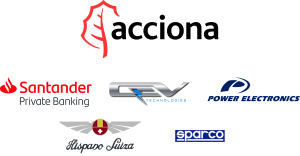